Not everyone agrees that the arrival of the modern settlers in Australia is cause for unreserved celebration. The country’s original inhabitants, the Aborigines, suffered great hardships as a result of the new arrivals.

Designed by Indigenous Elder Harold Thomas in 1971, this flag symbolises Aboriginal identity. Yellow represents the sun (giver of life) and yellow ochre. Red represents the red earth (the relationship to the land) and the red ochre used in ceremonies. Black represents the Aboriginal people.

The flag is flown or displayed permanently at Aboriginal centres throughout Australia. It is popularly recognised as the flag of the aboriginal peoples of Australia and should only be flown by other Australians when permission has been granted.

Mr Thomas has been recognised as the designer of the Aboriginal Flag by the Federal Court and has been given a backdated copyright to the design to 1971. 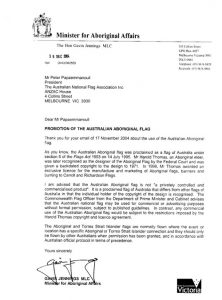