The chief national symbol of Australia by law, custom and tradition, the Australian National Flag, had its 100th birthday marked by a special series of ceremonies around Australia on 3 September 2001.

In particular a major event, The Festival of the First Flag, was held in Townsville. All ceremonies celebrated the importance and significance of our national symbol and brought members of the community together.

Please click here for details of the Centenary Flag. 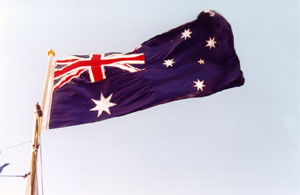 The centenary of the Australian National Flag was acknowledged by the Federal parliament which agreed to the following special resolution on 30 August 2001: