On 22 August, 1770, the First Union Flag was raised on Possession Island by Lt James Cook, RN. In so doing he proclaimed the whole of the eastern portion of Australia as British territory which eventually helped facilitate modern settlement of Australia. On 29 April, he had raised this same flag at Botany Bay. This design, which combined the red cross of St George (England) with the St Andrews Cross (Scotland), had been used in Britain since 1606. It is well known in Australia as the Queen Anne Jack. The cross of St Patrick does not appear on the design because it predates the union with Ireland, which took place in 1801. It became the first official flag of Australia until it was replaced by the modern Union (Jack) Flag in 1801 which, in turn, was superseded by the Australian National Flag. 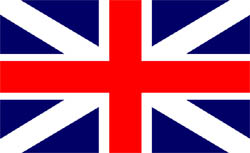