In the first half of the 20th Century, the Red Ensign had widespread use in Australia.

As can be seen, the Union Jack in both flags keeps its own blue background. This means in black and white photographs of the flag, it is usually possible to tell which ensign the flag is: In the Blue Ensign, the shade of grey will be uniform between the background of the Union Jack and the rest of the flag, whereas in the Red Ensign, the background of the Union Jack will be a darker shade of grey than the rest of the flag. This is important as most photographs of the first half of the 20th Century, during which the Red Ensign was used widely, are of course in black and white.

Official use of the Blue and Red Ensigns

Hence from 1901 to now, the Blue Ensign has been consistently used by Federal and State Governments, and has been the official flag of the Australian military.

Unofficial uses of the Red Ensign

The following diagram shows the status and use of both ensigns over the period: 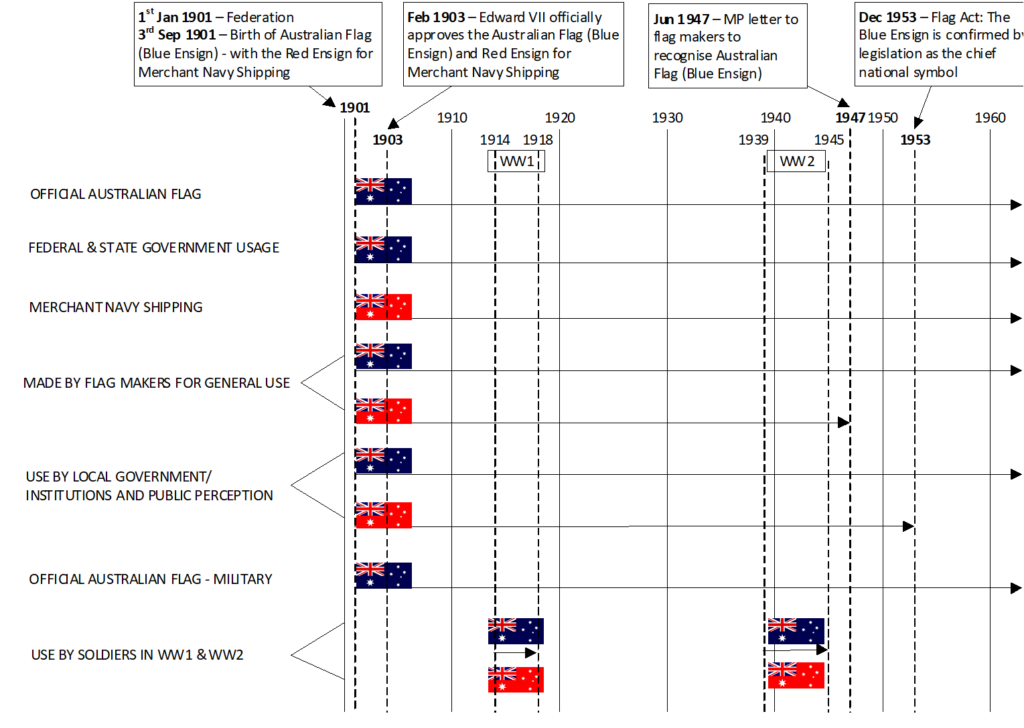 1953 – Flag Act: The Blue Ensign is confirmed by legislation as the chief national symbol by law, custom and tradition and its official title becomes the “Australian National Flag”.

(i) Also one of the colours the Union Jack

4. Cycle of supply, precedent and demand: Soon after 1901, certain flag makers started making the Red Ensign for public consumption, which in turn created precedent, demand and further supply, further precedent, and so on.

5. Many local councils and non-government institutions flew the Red Ensign, giving the general public the false impression of it being official

6. In the World Wars, merchant ships, legitimately carrying the Red Ensign, often took soldiers to war, giving them visibility of, and access to, the Red Ensign.