The Commonwealth Coat of Arms

The grant of arms to individuals, organisations, towns and States has its origins as a mark of royal favour dating back to the Middle Ages. Arms consist of objects arranged to distinguish the possessor by their particular kind, order and association. The complex and stylised art of arranging arms in systematic ways to express identity is known as heraldry and can be traced back to the early Crusades.

The shield is the central feature of a grant of arms. It contains certain distinguishing marks, which have had a long and close association with heraldry. The term ‘coat of arms’ refers to the custom in the 11th to 15th centuries of displaying the arms on a tunic or coat worn over armour. The crest, placed originally on the helmet of a knight to identify him in battle, was attached beneath a wreath originally of twisted silk in two colours. These colours have since been regarded as the livery colours of the arms. Both the crest and the supporters, which are on either side of the shield, are accessories to the arms.

It is proper that an authority performing the duties of government should bear the dignities and traditional rights of its office; including the right to bear symbols of its honour and authority. The Commonwealth Coat of Arms was granted by the Sovereign and fulfils these traditional purposes. It is an emblem signifying the national unity of Australia and serves as a sign of identity and authority.

The first official Coat of Arms granted to the Commonwealth of Australia was made by King Edward VII in a Royal Warrant of 7 May 1908. The Arms were composed of a simple shield of white and blue enclosing a cross of Saint George on which there were five six-pointed white stars, around the outside of which were six small escutcheons, i.e., small shields. The shield was supported by a kangaroo and an emu standing on a grassy mound. Above the shield was the crest containing the seven-pointed gold star of Federation on a wreath of white and blue. The motto ‘Advance Australia’ was inscribed at the base.

The first official Coat of Arms.

The absence of specific references to the States in the shield in the 1908 Arms led to a number of alterations approved on the recommendation of the Commonwealth Government by King George V in a Royal Warrant of 19 September 1912. The new design included a shield with six parts each containing a representation of the badge of a State. The positions and attitudes of the supporters were also changed. The colours of the wreath of the crest were altered to gold and blue. These are the ‘livery’ colours of the Arms. 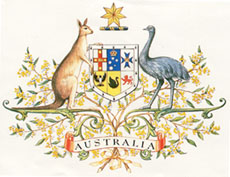 The second official Coat of Arms.

The new Arms were accompanied by small branches of wattle, ornamental rests for the supporters, and a scroll with the word ‘Australia’ – none of which are actually mentioned in the 1912 Royal Warrant.

The Arms must always be reproduced correctly and where possible in colour. However, if colour is not appropriate the Arms may be reproduced in stylised form as a line drawing, e.g. in black and white, silver, gold or as a mould or bas-relief.

Use of the Coat of Arms

Use of the Arms by private persons and organisations is seldom permitted since it is contrary to their essential meaning, may constitute a possible debasement of the Arms and may give rise to indiscriminate use. The association of the Arms with a trade, business, calling or profession is not normally permitted. Sporting and competitive representatives sponsored by their national controlling body may receive permission to wear the Coat of Arms on their uniforms, with the name and date of the event shown immediately beneath the Arms, when competing in officially recognised international events. Private persons and organisations may display the Arms as a decorative feature on particular national occasions, e.g. Coronations, Royal Visits, and Jubilee celebrations, provided it is not a permanent feature. Use of the Arms may be permitted on permanent souvenirs of a particular event, e.g. the Royal Visit of 1988. Publishers of encyclopaedia and reference, educational and heraldry books may be granted permission in certain circumstances.

In no circumstances should the Coat of Arms be used by private persons and organisations without prior approval of the appropriate Commonwealth authorities.

Significance of the Coat of Arms

The Coat of Arms consists of a shield composed of ‘quarters’ representing the six States of the Com-monwealth enclosed by an ermine border. The quarters provide a place for each of the States on the shield. Devices representing the six States are arranged in two rows on the shield. From left to right in the top row are the devices of New South Wales, Victoria and Queensland (Quarters 1, 2 and 3) and in the bottom row are the devices of South Australia, Western Australia and Tasmania (Quarters 4, 5 and 6). The ermine border signifies the federation of the States into the Commonwealth.

The Crest of the Arms is a seven-pointed gold star symbolic of national unity on a gold and blue wreath, which is a traditional element represented as a twisted ribbon or Torse of the two alternate colours gold and blue. A star of six points was originally chosen to represent the six States but a seventh point was added to represent the territories of the Commonwealth before the design was finalised. This seven-pointed star is also used on the Australian National Flag and is termed the Commonwealth Star.

The supporters, the kangaroo and the emu, are two typical Australian creatures which were also included in the 1908 Arms. Both are indigenous to Australia and are regarded as suitable for heraldry, design and reproduction uses. Each in turn has appeared at various times on postage stamps. Although the Royal Warrant did not indicate a species of kangaroo, that depicted on the original painting is assumed to be the Red Kangaroo (Megaleia rufa) which is the widest distributed species on the continent. The emu (Dromaius novaehollandiae) and the kangaroo, as typical Australian fauna, further identify the Arms as being exclusively Australian.

Usually the Arms are depicted with branches of wattle tied with ribbon, emblematic of Australia, and with a scroll having the word ‘Australia’ at the base. However, the wattle, the scroll and the brackets upon which the supporters rest do not constitute part of the complete Armorial Achievement and are not mentioned in the Royal Warrant.

Description of the Coat of Arms

Blazoning is the art of describing in words a coat of arms in heraldic terms so that it can be reproduced accurately in any part of the world. It allows for artistic licence in the way an heraldic painter illustrates the items described. The broad meaning of the blazon, or official description of the Arms, is as follows:

First Quarter (Representing New South Wales)
Background silver, featuring the Cross of St George containing an heraldic gold lion, walking to the wearer’s right (viewer’s left), three paws on the ground, the right forepaw being raised, the head turned so as to face the spectator and the tail curved over the back, and on each arm of the cross an eight-pointed gold star.

Second Quarter (Representing Victoria)
Background blue, containing five stars, one of eight points, two of seven points, one of six points and one of five points (the constellation of the Southern Cross) with an Imperial Crown in normal colours placed above the first star.

Fourth Quarter (Representing South Australia)
Background gold, containing an Australian Piping Shrike perched on a twisted band of green and red (the bird has its back to the viewer).

Sixth Quarter (Representing Tasmania)
Background silver, featuring a red lion walking to the wearer’s right (viewer’s left) three paws on the ground, the right forepaw being raised, the head looking forward and the tail curved over the back.