This flag, featuring a golden Southern Cross and Union Jack, is similar to the Australian National Flag today. However the design was adopted in 1851 in a campaign led by the Reverend John West, once editor of the Sydney Morning Herald, against the transportation of convicts to Australia and New Zealand. It was flown in both countries where the “stars and crosses” tradition continues in the respective national flags. The Queen Victoria Museum in Tasmania is the repository of one of these original Anti-Transportation League flags. The design was not used in Western Australia where convicts were in demand as a source of inexpensive labour. 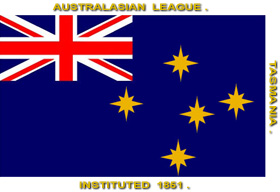