The aim of The Flag Promise is to encourage the appreciation and acceptance of the principles of citizenship. 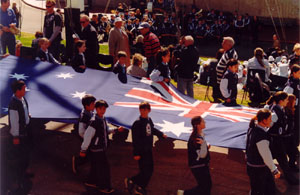