The Australian flag displays a group of stars on a blue background, with, up in the left corner, the Union Jack, Great Britain’s flag. The five designers of our chief national symbol believed that, to truly represent the sentiment of the Australian people, our national flag needed to consist of a combination of “stars and crosses” (the Southern Cross), the Commonwealth Star and Union Jack.

The Australian National Flag identifies a free and democratic people in a country united in spirit and purpose. Our National Flag belongs equally to all Australians whatever their origins. Each symbol on the flag has a special meaning for Australians. The stars of the Southern Cross represent our geographical position in the Southern Hemisphere, the Commonwealth Star symbolises our federation of States and Territories, and the Crosses stand for the principles on which our nation is based – namely, Parliamentary Democracy, Rule of the Law and Freedom of Speech. It is the right and privilege of every Australian to fly the Australian National Flag.

The Commonwealth Government announced a Federal Flag design competition on the 29th April, 1901. The Review of Reviews for Australasia, a Melbourne journal, had initiated an Australian flag competition in 1900. It was agreed that the entries received by this journal would be accepted in the Government’s competition. The contest attracted 32,823 entries from men, women and children. The expert panel of judges assessed the entries using guidelines which included history, heraldry, distinctiveness, utility and cost of manufacture. 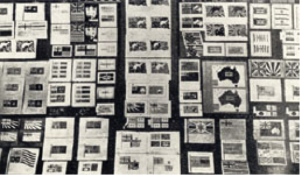 On 3rd September 1901, a public ceremony was held at the Royal Exhibition Buildings, Melbourne, where Lady Hopetoun, wife of the Governor-General, opened a display of the entries in the competition. The Prime Minister of Australia, Edmund Barton, announced that five entrants, who had submitted similar designs, were to share the honour of being declared the designers of Australia’s own flag. They were: Ivor Evans, a fourteen year old schoolboy from

The Commonwealth Government and the Review of Reviews for Australasia provided £75 each and the Havelock Tobacco Company added £50 to this, making a total of £200 prize money, a considerable amount at the time. The five winners received £40 each.

The Australian Flag flown since 1908.

Under the Flags Act, 1953, passed unanimously by parliament, it was confirmed that our “Stars and Crosses” design be the chief national symbol by law, custom and tradition and that it be honoured with the title “Australian National Flag”. The new status of the national flag was emphasised when the act of parliament received royal assent from Queen Elizabeth II, when Her Majesty was on her first visit to Australia in 1954.