Paint Your Own Flag

By now you’ve probably read all about Ivor Evans, the Schoolboy who was one of the five designers of our Australian flag back in 1901. 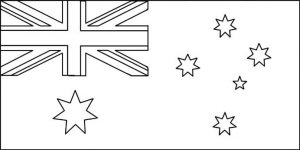 The large star below the Union Jack is called the Federal or Commonwealth Star. This seven pointed star stands for the six states and the territories of Australia.

To paint your own flag just click on the image above. This will take you to a blank illustration of The Flag. Just print it out, and grab your paints, pencils and crayons…