The Australian White Ensign mirrors the design of the Australian National Flag with the field colour reversed to white and the stars rendered in blue. The distinctive naval design dates from 1 March 1967 when Australia was involved in the Vietnam War. The tradition of Australian flags featuring the Southern Cross and Union Jack dates from 1823 with the advent of the National Colonial Flag of Australia which was a white ensign featuring the naval cross of St George on which was displayed four stars representing the constellation of the Southern Cross.

Circumstances Surrounding the Adoption of the Flag

From its inception in 1911 the Royal Australian Navy flew as its distinguishing flag the White Ensign featuring the red cross of St. George handed down to it by the Royal Navy where it had been flown since 1864. There had been proposals at the time that a distinctively Australian flag should be adopted but these were overruled by the Admiralty who considered it more appropriate that all Commonwealth navies should continue to fly a common ensign. In this regard it must be remembered that at its birth the RAN was realistically an offshoot of the RN, comprised of ships and equipment of exclusively British origin and with all senior positions filled by British officers on loan; indeed it was not until 1948 that the position of Chief of Naval Staff was filled by an Australian. This flag arrangement was accepted for many years; our Navy had been founded upon the traditions, regulations, laws and procedures of the Royal Navy, our officers underwent much of their training in the UK and most RAN ships, aircraft and materiel continued to be of British origin or design.

Following World War II however the RAN in line with the rest of the Australian community began to develop more independent attitudes and a growing feeling that our policies, our ships and our personnel should be more readily identifiable as Australian. Recognising this, in 1965 the First Naval Member, Vice Admiral Sir Alan McNicoll initiated action for change by soliciting views on the desirability of adopting a distinctively Australian White Ensign. He made the points that in overseas waters our ships needed to be readily identifiable if the national policy of projecting Australia as an independent nation was to be furthered and that in home ports our Navy needed to be seen as an Australian service totally independent of any form of overseas control. The involvement of RAN ships in the Vietnam War where they were flying a distinguishing ensign identical with that of another country not engaged in the war lent logic and urgency to his argument.

Vice Admiral McNicoll’s proposal for change was warmly accepted throughout the Navy and proposed designs for an Australian White Ensign were called for. Several designs eventuated and on 21st January 1966 the Naval Board recommended to the Government that:-

The design had been initially submitted by then Commander G.J.H. Woolrych RAN.

Following Government approval and that of Her Majesty the Queen, the introduction of the Australian White Ensign was promulgated on 23rd December 1966 by signal from the Naval Board stating inter alia:

“this change has been made on the recommendation of the Naval Board which is confident that the new ensign will be welcomed by the majority of officers and sailors. We are all proud to have served under the White Ensign but it is now appropriate that an unmistakable indication of the RAN’s position as an independent service of an independent nation of the British Commonwealth should be displayed in Her Majesty’s Australian ships and establishments.

…In deciding on the design of the new ensign the Naval Board was influenced by it’s desire to preserve traditional links with the Royal Navy which helped to found, foster and develop our service…”

The Australian White Ensign was introduced into service on 1st March 1967, was popularly received within the RAN and the Australian community and has been flown proudly since that time. 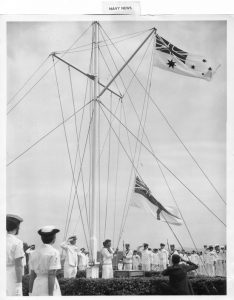