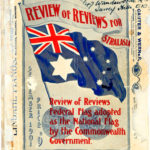 The edition of the Review of Reviews front cover signed by Egbert Nuttal, after the winning designers were announced. 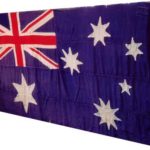 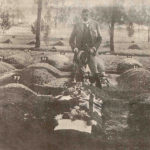 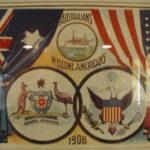 A poster commemorating the visit of the US Navy ships in 1908. 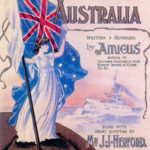 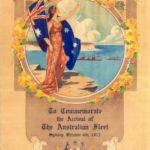 A commemoration of the arrival of the Australian Fleet. 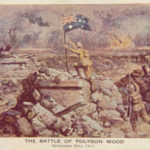 Lt AVL Hull of the 18th Battalion AIF, plants the Australian flag on a German Pillbox as Australian forces overrun Anzac Redoubt, on the Menin Road, during the famous battle of Polygon Wood (Belgium) in WW1.

This dramatic incident took place at 7:15 AM on September 20th 1917. Lt Hull was killed in action three weeks later.

This picture was used as a Christmas and New Year’s Greetings card in 1917-18. 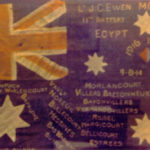 Flag carried to many locations during the war period by a member of the Australian Army Corps. 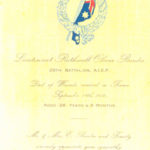 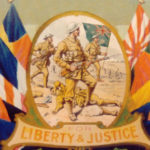 WW I Certificate of Appreciation. 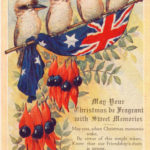 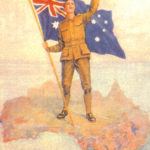 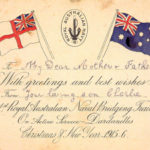 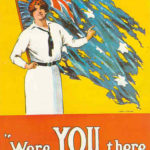 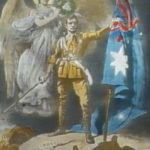 World War I postcard shows an Anzac with the Australian flag at Gallipoli.

Patriotic badge from World War I. The Comforts Fund raised great sums of money at home in Australia from civilians which went towards the war effort. Concerts and fairs were organised, and badges such as these were sold. 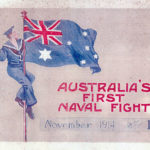 Commemorating the Naval Victory of the HMAS Sydney over the German Light Cruiser Emden, 1914. 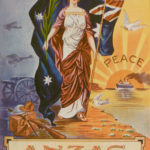 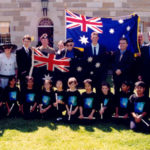 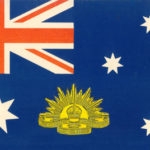 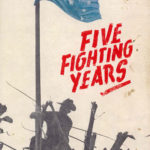 The pictorial cover is a photographic record of Sgt. Derrick raising at Satelberg the Australian flag which had been flown previously over recaptured Kokoda and Lae (1943). 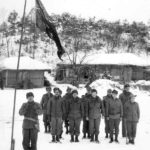 Australian soldiers are standing to attention in their snow covered camp during the Korean War in 1951. The Australian flag is being hoisted by W.J. Harrison. 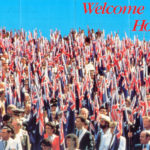 On 3 October 1987, the Australian public finally welcomed home those men and women who served in the Vietnam War. 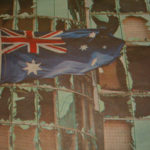 The symbol of our nation in front of the bombed Australian Embassy in Jakarta, 9 September 2004 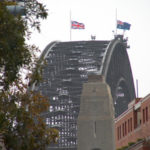