At the 2018 Commonwealth Games at the Gold Coast our athletes performed brilliantly and did us proud. They waved the Flag, and we were delighted with their well-earned successes. 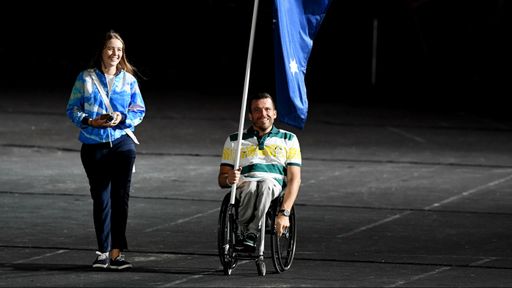 But, sadly, the debacle of the non-broadcast of the athletes of all competing nations, including our own Flag bearer, Kurt Fearnley (pictured) at the closing ceremony, on April 15th, will forever taint our memory of these Games.

It was not a technical failure that caused the absence of telecast of this important ending to the Games – it was a conscious decision by GOLDOC, the Gold Coast 2018 Commonwealth Games Corporation, and the US-based company they contracted, not to broadcast the athletes.

The overwhelming reaction to the terrible decision was one of anger and disappointment from television network commentators, politicians, including Queensland Premier Annastacia Palaszczuk, and of course the viewing public. We were all denied the customary pleasure of seeing all athletes march proudly behind their national flags, the traditional prideful closure of any great competitive event between nations. The decision of course also denied the athletes themselves this celebratory closure.

The Chairman of GOLDOC, Peter Beattie, made announcements taking full responsibility for what went wrong. Mr. Beattie did the honourable thing, and it was the most expedient possible handling of the aftermath.

But we need to look at this more deeply – behind the scenes, what were the machinations which led to this denial of our celebration of the end of the games? And what can we learn from this?

It comes down to the decision to tender a major event where sovereignty and customs are important, to a multinational corporation. In this case, GOLDOC awarded the tender to the US marketing firm, Jack Morton Worldwide, which is run out of a non-Commonwealth country, the United States, in preference to three Australian firms, David Atkins Enterprises, Ric Birch’s RMBC and JB World Events.

If GOLDOC had awarded the management of these games to one of these Australian companies, we can be almost certain we would have had a customary ending to the Games, and we would have been able to look back with pride and pleasure at these games in toto. But such was not the case.

Multinational companies by their very nature, consciously or unconsciously, have no regard for sovereignty as a value in and of itself. They naturally see nations as regions of their corporation, rather than nations in the true sense. Leaders within such corporations tend to regard the world as a global village in which local cultures, languages and borders, are merely quaint aberrations, or even annoyances, to be weathered in their drive for the global success of their corporation. Multinationals are therefore badly placed to understand and appreciate the customs of events such as the Games, because those customs are based on the concept of sovereignty, and the friendly competition between nations.

It was therefore a serious mistake for GOLDOC to award a tender for the management of Commonwealth Games events to a multinational firm, especially when strong bids had been made by local companies.

Just before the games, GOLDOC, for their own web site, interviewed the Artistic Director from Jack Morton Worldwide, David Zolkwer, who designed the opening and closing ceremonies. Mr. Zolkwer, to his credit, revealed the extent of research he had taken in the local setting of the Gold Coast, and his genuine passion for having the appropriate design of the ceremonies oriented to the host city.

However, Mr. Zolkwer also indicated that custom was to be down played. This did not raise alarm bells with GOLDOC!

Mr. Zolkwer said, “The Gold Coast is uniquely qualified to not play the usual ceremonies game, with looking inwards and backwards… We’re not here to do the ceremonies to the people who are here on the Gold Coast.”

And here-in lay the problem: Athletes, nations, national flags – they are the custom and essence of the Games. And Mr. Zolkwer’s comments are an insight as to why they were shut off from broadcast at the end of the Games.

But the take-away from this is not just about GOLDOC and the firm they engaged. The take-away is the policy of tendering a major event where sovereignty and customs are important, to a multi-national corporation to whom sovereignty and customs are of little importance, and further, a multi-national based in a country with no connection to the event. That policy is wrong, and we have seen its disastrous results here.

The Queensland Government are obviously angered and embarrassed by the closing ceremony debacle. It is the hope that they take the right measures from here, not just looking back to the specific mistakes, but also to look to future policy. The question needs to be asked, and answered, how can organisers of all events in Australia, where sovereignty and customs matter, be directed, by regulation if necessary, only to contract event management to companies with a natural interest in sovereignty, and therefore the customs of the event. This can only mean looking locally to Australian companies, and certainly avoiding the multinationals.